Craftivism is a form of activism in which crafts are used for commenting on social issues. 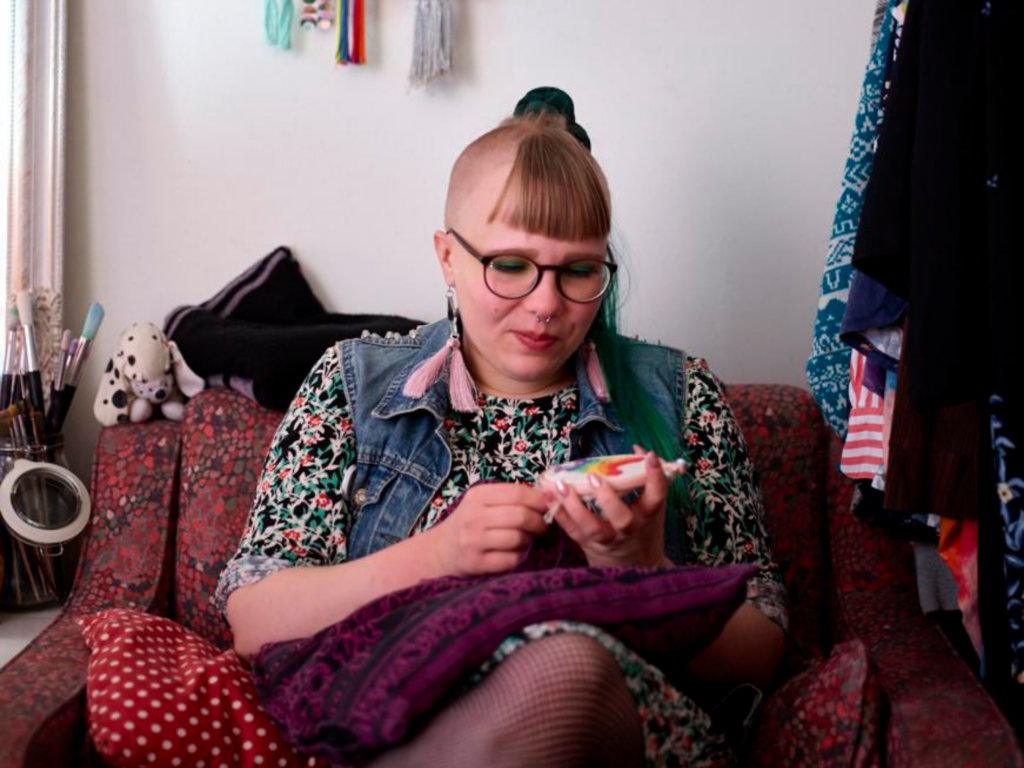 Hanna Väätäinen has led a crafts group at the Kaikkien Naisten Talo in Turku since 2018. The group participants have been women undergoing the residence permit and asylum process. The women have designed and created a wall cloth, banner and tablecloth that call for humane asylum policy and participated in the 2019 and 2021 Knit’n’Tag events with works demanding peace and the termination of forced returns.

Riitta Skytt has held various positions in the media business. She is currently a pensioner and freelancer who still writes articles discussing disability and being different for organisational magazines. For Riitta, it is important to ask, among other things, what kinds of crafts could address the inaccessibility of public spaces. How can you fend off unwanted help with crafts?

Kevät Sieppi is an artist, a student completing the Master’s Programme in visual arts education at Aalto University, a visual arts teacher and an activist by nature. Human rights and LGBT themes, respecting gender diversity, environmental themes, feminist art, criticism of capitalism and art as a form of emotional labour are important subjects for Kevät.

Niko Lindgren alias Mending Neko mends clothes as a form of activism. Niko believes that mending clothes is the most direct and immediate way of expressing discontent towards the status quo of the clothing industry, raise awareness of the problems and reflect on the impossibility of the current system.

Tarja Suomi has been a producer in various events relating to handicrafts. Since 2013, Tarja has directed the Knit’n’Tag event on the shore of Aurajoki in Turku. The event is open for everyone and involves decorating magnificent Tilia trees with knitted graffiti. The works in the event have addressed themes such as mental health services, the standing of LGBTIQ people and asylum policy.

Linnea Saarits is a self-educated handicraft artist who uses various embroidery techniques for making art, for instance as part of the “Lanka Palaa” art collective. She has led a “radical cross-stich group” since 2016 and later, together with Vilja Joensuu, founded the crafts group named “Some Sewing Circle” in Finnish.

Vilja Joensuu is a dressmaker who has left her trade. This anti-crafts-person has found a channel for expressing herself in embroidery. She is self-educated as an artist. To Vilja, applying handicraft methods and traditions is a political choice in itself. Crafts involve hierarchies and power between genders and social classes, and making crafts as a technique for making modern art or a tool for activism is a way of dismantling these structures.